Cardon Design created these fantastic covers for Vintage. You can pick these Oliver Sacks books up in stores now.

There are a couple of events this weekend that might be of interest to readers.

Tonight, there will be a discussion of borrowing in the digital age: Hallowed Ground? The Library of the Future. This free event starts at 8pm tonight, Friday 23 September at the Customs House Library.

Robert Adamson, the winner of the Blake Poetry Prize, will talk about poetry and spirituality with Judith Beveridge, poetry editor of Meanjin, at The National Art School in Darlinghurst. This is a free event from 2-3pm Saturday 24 September 2011.

Lifeline are having their Spring Bookfair in Canberra this weekend. These fairs usually have plenty of bargains and the proceeds raised help fund Lifeline Canberra’s telephone counselling services.

The UTS: Sydney International Animation Festival kicks off today and finishes on Monday 26 September. There will be expert panels and Q&A sessions as well as a showcase of work by UTS students.

This Saturday is also the start of the Art And About month. There will be installations and activities around Sydney.

As a new feature we are planning on writing a short post each Tuesday morning detailing all the book related news of the past week. Interviews, poems, articles and anything related to reading, writing and authors will be posted. We kick things off a bit late this week END_OF_DOCUMENT_TOKEN_TO_BE_REPLACED

At Mycroft Books we are fans of printed text. Bound books, pamphlets, the search through dusty stacks for that elusive great book, the smell of an old hardcover, the slight crack of glue in the spine when you open a book for the first time…

While 140 characters might not provide much chance to write Twitter can be a good way to learn more more about your favourite authors – upcoming readings, new projects, points of inspiration, as well as other writers to follow and read.

Mycroft Books is on Twitter (@MycroftBooks) and we follow a few writers as well as publishers and magazines. Read more to find out who we follow.
END_OF_DOCUMENT_TOKEN_TO_BE_REPLACED 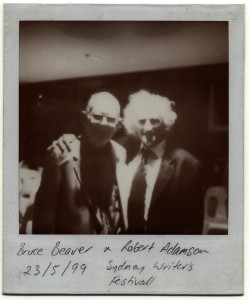 Sydney poet Robert Adamson has won the 2011 Blake Poetry Prize for his poem ‘Via Negativa, The Divine Dark’ (PDF).

Read the Judges’ Statement and more about The Blake Society.

“Forget your personal tragedy. We are all bitched from the start and you especially have to be hurt like hell before you can write seriously. But when you get the damned hurt use it— don’t cheat with it. Be as faithful to it as a scientist— but don’t think anything is of any importance because it happens to you or anyone belonging to you.” 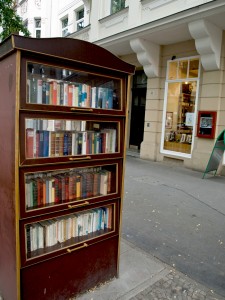 In German towns you will see bookshelves that are actually small libraries. They are called “Open Bookshelves” and people are free to take or leave books here at any time of the day or night.

The concept was first trialled in Graz, Austria and are seen as a kind of ‘social sculpture’ with the variety of books representative of the people in the town who use the library.

With one exception there has been no graffiti or destruction of books and a small anonymous group of guardians ensure that no objectionable books are left on the shelves and that the glass doors are cleaned.

“The next real literary ‘rebels’ in this country might well emerge as some weird bunch of anti-rebels, born oglers who dare somehow to back away from ironic watching, who have the childish gall actually to endorse and instantiate single-entendre principles. Who treat of plain old untrendy human troubles and emotions in U.S. life with reverence and conviction. Who eschew self-consciousness and hip fatigue. These anti-rebels would be outdated, of course, before they even started. Dead on the page. Too sincere. Clearly repressed. Backward, quaint, naive, anachronistic. Maybe that’ll be the point. Maybe that’s why they’ll be the next real rebels. Real rebels, as far as I can see, risk disapproval. The old postmodern insurgents risked the gasp and squeal: shock, disgust, outrage, censorship, accusations of socialism, anarchism, nihilism. Today’s risks are different. The new rebels might be artists willing to risk the yawn, the rolled eyes, the cool smile, the nudged ribs, the parody of gifted ironists, the ‘Oh how banal.’ To risk accusations of sentimentality, melodrama. Of overcredulity. Of softness. Of willingness to be suckered by a world of lurkers and starers who fear gaze and ridicule above imprisonment without law. Who knows.”